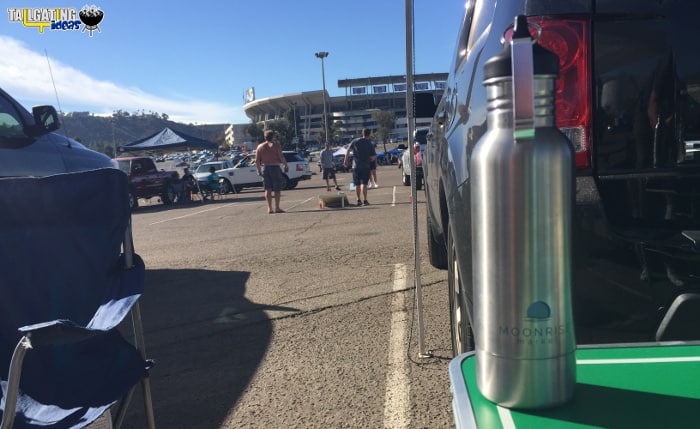 You want to keep your beer ice cold while tailgating. We get that. You also want to cover it up and disguise it from being noticed while in a tailgating parking lot that either bans alcohol or glass or even worse, both. We found a great new product that lets you disguise your bottle all while keeping your bottle ice cold.

It’s called the Cool Capsule. In a nutshell, the Cool Capsule keeps your drink cold while discreetly disguising it as an ordinary refillable water bottle. The Cool Capsule is made from food-grade stainless steel and the neoprene sleeve not only adds a second layer of insulating but is durable as well.

As you can see in the photo gallery above, the Cool Capsule is three parts that go together. Unscrew the bottom of the Cool Capsule and place your bottle in the bottom cup. Slip the cylinder over the bottle to full enclose the bottle. Screw on the top cap (that includes a handy bottle opener) and your beer bottle is completely covered and kept cold. Slip the neoprene sleeve over it and you now have an extra layer of protection and an easier way to carry it.

We took the Cool Capsule tailgating with us this past Sunday for the San Diego Chargers vs. the Miami Dolphins game. The above photos demonstrate that we indeed had a glass bottle (a big no-no at Qualcomm Stadium) in the parking lot and did not get a citation from the San Diego Police patrolling the parking lot. We even carried the bottle across the parking lot, passing a number of police cruisers, to say hello to neighboring tailgaters. The police was none the wiser and the beer inside was just as cold when we returned to our own tailgating space as it was when we took it out of the cooler.

Some of the comments we received from fellow tailgaters was that the Cool Capsule would be great for other venues that bans alcohol. Some suggestions were street festivals and beaches would be ideal for the Cool Capsule. Maybe even walking the dog in the neighborhood so as to not alert your neighbors you are drinking a beer out in public.

The Cool Capsule is $19.99 and available from Amazon.