“Beer is proof that God loves us and wants us to be happy.”

With March Madness well underway, that means baseball season is right around the corner. And no matter if your baseball team is a lovable loser or is in store for a great season, there is nothing like tailgating before a baseball game. That attitude and love of tailgating are no more exemplified than in the form of The 12 Man Beer Bong. You read that correctly. 12 people can simultaneously bong beer while tailgating. This 600-pound monstrosity stands almost 9 feet tall, can handle two kegs of beer, and requires its own cart for transportation. Did I mention that it can serve two different kinds of beer at the same time? You know, for those light beer drinkers that are watching their girlish figure when funneling beer.

The creator of this gift from heaven is Jeff Barton from Milwaukee, WI. (Why am I not shocked someone from Milwaukee would create a beer bong this huge?) Barton apparently put his engineering degree from the Milwaukee School Of Engineering to great use. Who needs bridges and space stations built when you can create a faster and more fun way to drink beer while tailgating?

For those of you wanting the details of how this bad boy works, here are some specs: It has four main arm sections that each split off into three tubes for drinking. Valves located just below the top reservoir can close off each of the four arm sections, thus allowing the beer bong to serve as a 12-man, 9-man, 6-man or even a 3-man beer bong with the simple closing of a valve. (Brilliant!) Each individual drinking tube has a ball valve at the end of it which allows the drinker to proportionally control the amount of flow they are receiving and shut off the flow if they’ve had enough.

The 12-man beer bong’s top reservoir self-fills from its barrels in about 20 to 30 seconds with a simple flip of a valve. It provides about 24 ounces of beer on average to the drinker in a matter of seconds. A five-pound CO2 tank pressurizes the entire system so there’s no need for “pumping” the kegs.

Still not convinced this is the coolest tailgating contraption ever made? It also features “the Bubbler”. Yes, an old-school drinking fountain that dispenses ice-cold beer instead of water. (That sound you just heard was Homer Simpson having an orgasm.)

Want to see the 12-Man Beer Bong in action? Check out the video. 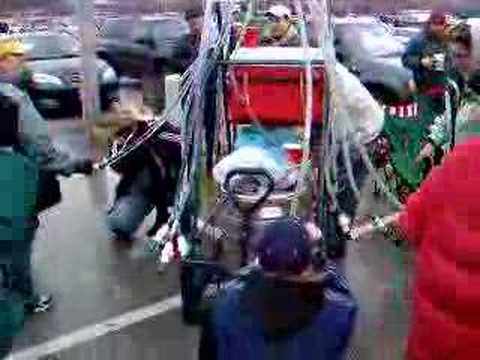 The 12-Man Beer Bong looks to be a one-of-a-kind, custom-made deal. No word yet if Barton has plans to manufacture and sell these things. Make sure to check out the official website for more info on the 12-Man Beer Bong.

No matter if you are using a beer bong while tailgating or just having a few adult beverages, please know your limit and drink responsibly. Most importantly, always designate a sober driver.

Please, do not drink and drive.