It is no secret I love tailgating. Most people look at a sun splashed parking lot as a dirty, grimy boring place to be. I see that same parking lot as a playground and as close to Nirvana as one can get. So when I get to share my love and passion for the tailgating lifestyle with others who have had limited or no exposure to it, it fires me up. I’d love to convert the whole world to my way of thinking that tailgating should be allowed prior to any event as long as their is a parking lot nearby. Think of me as a tailgating missionary trying to convert the whole world to my way of thinking. More like a Mormon Missionary of tailgating but instead of an oxford shirt, black tie and a ten speed bike I am in shorts, a non-politically correct T-shirt and a beer in my hand. So what is my point I am getting at? Here it is:

Many times while I am out tailgating and pull out a fun and cool gadget that makes noise or attracts attention, i.e. the Drill Blender, I have other folks in the parking lot ask me, “Where did you get that?”. Most comment that they would have thought I got it at a state fair or a swap meet. Other fun tailgating gear like the N-Ice Rack observed in practice in the parking lot garners the same reaction and assumptions. Other comments I have heard from people have been, “If I had some fun and cool gear like that I would probably go tailgating more often.”.

DING! Did you just see the light bulb go on above my head?

Hearing that would be the “a-ha moment” when it dawned on me that some people do not enjoy tailgating as much as I do because they are not as comfortable being away from all the creature comforts of their own home. So if I could introduce them to the tailgating gear that would make them feel more comfortable in a parking lot, the chances of them going tailgating more often dramatically rise. And coinciding with my master plan of trying to convert everyone into a tailgater, why start with those who are already tailgating prior to a sporting event or concert? After all, that would be the proverbial “preaching to the choir”.

If I wanted to expand the exposure of the tailgate party lifestyle, I needed to go somewhere where the people were not tailgating but would be receptive to new ideas and new products they had never seen before. So I figured why not try my local swap and see if people would find some of the cool tailgating gear I have discovered over the years interesting. If they chose to buy it, that just increases their chances of using it while tailgating. 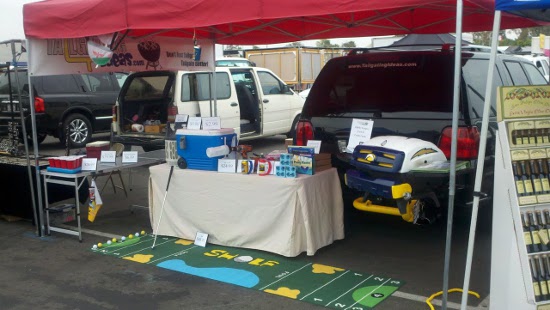 So this past weekend was my first weekend with a booth space at the OC Swap Meet. I rolled out of bed on both Saturday and Sunday at 4:30 am in order to be in line by 5:15 am to get in and start setting up by 6 am. I made sure to configure my booth space so that my customized San Diego Chargers Grill was easily visible off of the rear of my vehicle. That way swap meet attendees could see not only was it customized but that it attaches to the rear of your car. I also brought some unique tailgating gear that you normally do not see in those big box retail stores like the previously mentioned items along with the Clear View LPG tank, BoozLuge, Icy Shot Glasses, Sholf among other tailgating gear.

All in all, I would say the reaction was a positive one. In addition to putting some cool tailgating gear in the hands of soon to be (hopefully) tailgaters, I was able to at least raise the awareness that tailgating is not the stereotypical activity that is all too often negatively portrayed in the media.

As for if I will be attending the OC Swap Meet as an exhibitor, that is looking like a distinct possibility. The good news is that I have about four or five weeks to think about it because the Orange County Fairgrounds (home to the Orange County Marketplace on weekends) will be used for the Orange County Fair until Mid-August. The next available swap meet weekend, once the OC Fair closes, is August 20-21, 2011. My wife has a girls trip to Las Vegas that weekend so I am  on daddy duty for those days. The following weekend may be out as well because one of the two fantasy football leagues I play in has scheduled the draft for that Saturday. More than likely the next available weekend to do the Swap Meet would be the first weekend in September and that is Labor Day Weekend. Typically that is a weekend where many Southern California people get out of town and go to the river or Las Vegas and I am not so sure there will be many people going to the Swap Meet. But for now I can evaluate if it was worth my time and energy to do the swap meet again. Preliminary gut feeling says it was successful and at the very least the majority of people who stopped by my booth also took away a business card.

To those of you who are new and found this tailgating blog by way of the Orange County Swap Meet, welcome and we hope you become a regular.