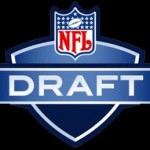 Did anyone else catch Steve Young’s yawn during Friday’s telecast of the NFL draft?  But honestly, could you blame the guy?  The NFL draft was long!  This fan tapped out minutes into Day #3.

As the non-tailgating things often do, the NFL draft got this fan thinking about tailgating.  Each year our favorite NFL teams get the opportunity to pick their future by drafting their ideal player.  So why can’t a tailgater?  What would the ultimate tailgater be and have?  Well, here is one’s fan ideal recruit

And of course being a master cook goes without saying!