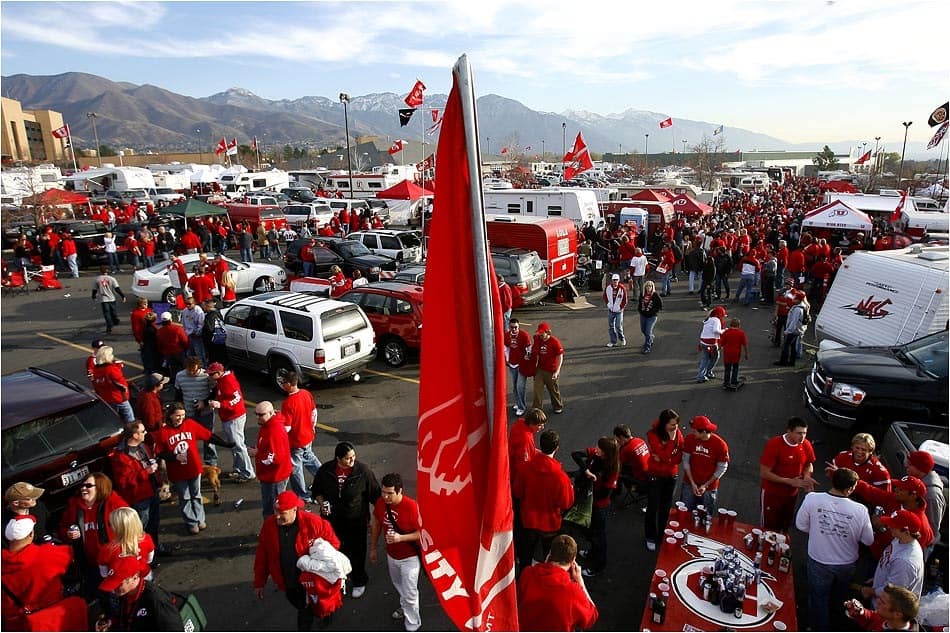 Pac 12 tailgating is certainly different from the other five BCS conferences. Considering it is comprised of mostly west coast schools, it should be. One thing it has that no other conference in the country can create, is the picturesque landscapes. Whether it’s the deserts of Arizona, the lake at Washington or the mountains of Colorado, almost every school’s tailgate has beautiful scenery surrounding the stadium. The Pac 12 might’ve been the most difficult conference to collect data on tailgating, but hopefully these rankings will encourage tailgaters to raise their school’s tailgating up to higher levels, generating more information and better rankings in the future. Washington: Tailgate yachts, snow capped mountains, salmon and crab are just some of the nouns that describe a Washington tailgate. On most Saturday’s in the fall, over 10,000 people party out on Lake Washington before heading off into Husky stadium, makes Washington one of the most unique tailgating experiences in the country. Members of Washington’s rowing team will even shuttle you from the dock to your boat. How is that for service? “Sterngating” is very unique. Where else can you fish for your tailgate food and then cook it minutes later? Besides tailgating in boats, there are also several painted RVs that do a good job of maintaining a solid ground atmosphere near the stadium.  Bottom line is this is one of the coolest places to visit in the whole country. Oregon: If you come, prepare for duck whistles and camo gear to suffocate you. Oregon sports a very colorful atmosphere with plenty of campers, buses and ambulances to satisfy the uniqueness factor. Another notch in the belt for the Ducks is having the country’s best looking cheerleaders. Oh, and Nike pretty much hooks them up with everything imaginable, creating a plethora of t-shirts and jerseys strutting around outside the stadium. There are some negatives to Oregon tailgating, but none that the fans can control. Remember that it is the Northwest portion of United States and the weather likes to be cold and wet on more than just an occasion. Arizona St: It’s a little different than other schools because you have to realize that you’re tailgating in a desert. It is HOT! Speaking of which, anyone who follows rankings in college football knows that the Sun Devils produce beautiful women, which is a huge perk to tailgating here.  Tailgate canopies and jalapeno poppers are man’s best friend outside the stadium. Overall, tailgating at ASU has enough sun and pretty women to allow for a good time. USC:  Much like the state of California, USC tailgates seem a bit more laid back. The ethnically diverse fans wind up cooking a wide array of foods; from brats, to jalapenos, to brisket. The fancier part of Trojan tailgates would be the alcohol, as most folks push aside a 30 pack of light beer and go for the more expensive stuff.  USC is usually crawling with beautiful women and a funny and unique note would be that when UCLA comes to town you will see little teddy bears hung from trees or just dragged on the ground.

Arizona: The mall is Arizona’s most beautiful and popular tailgating spot. It breeds fun and won’t disappoint. Breakfast burritos are a popular Southwestern tailgating treat, as well as Jalapenos and peppers. Like Arizona State, the most popular tailgating item would be the tent, creating a cool spot in the middle of the Arizona desert. UCLA: Has an advantage because you’re tailgating at the Rose Bowl, which is a stadium where history runs deep. Another advantage would be the gorgeous women of UCLA. Unfortunately over the years things have gotten out of hand and Pasadena Police began patrolling the grounds in 2011 to reel in the people who had no intentions of watching a game and just making a fool of themselves. They even extended the rules to drinking games, completely prohibiting them.

Colorado: If you visit you will see one of the most beautiful landscapes in college football and taste some of the best tailgating food in the Pac 12. Boulder has gotten some major respect for its tailgating food recently as both Man vs. Food and Food Network have filmed shows during tailgates. Utah:  You will see plenty of campers, converted buses, and even a bus converted into a pirate ship that has nothing do with the Utes, but still gets an A for creativity in my book!  In a first, not seen anywhere else in the country, some Ute fans have tailgating teepee’s. Utah has a nice setup, and if you want to go to the best tailgate of the year then you wait for the annual Holy War against BYU.

Oregon St: Seems to have friendly tailgaters – unless you’re wearing Oregon or Boise State gear. One of the nice things about Oregon State’s campus is that even if you aren’t a donor you can still get decent parking at a great price ($10). They have an awful rule that says you can’t have tailgate parties bigger than 25 people (I hope people find ways to get around it). Overall the tailgating is just average, nothing great but nothing poor.

Stanford: A lot of older alumni tailgate at these games, and apparently students tailgate in a few small areas. The tailgating is much more laid back than other places and definitely lacks a wow factor. One cool thing about Stanford tailgating would be the opportunity to park under massive trees that provide ample shade from the hot California sun.

Cal: Berkley certainly is a strange place and the tailgating atmosphere is no different. Due to the lack of parking space near the stadium, most tailgating takes place at faraway places: either on the BART trains, or at the Berkley bars before the game. A unique thing Cal has is various a capella groups that will wander around campus singing several fight songs to anyone who will stop and listen.  Parts of the stadium are surrounded by trees and when the stadium gets full, certain folks will climb into the trees to take a gander down on the field.

Washington St: The best thing I could find about Washington State was the beautiful mountainous backdrop of the campus. It was tough to find tailgating information and footage, but they’ve been bad for a bit so that could be the reason. The Cougars get an N/A until further notice.