In part of an ongoing series I am releasing rankings of the top tailgate schools in each BCS conference. The second part of the series is a review of ACC country. This conference has a diverse tailgating culture due to its coverage of the entire East Coast.

1. Florida St: Beautiful girls, palm trees, sunny skies, flowing drinks. No, it’s not Hawaii – it’s a tailgate in Tallahassee. Known as one of the top party schools’ in the country the Seminoles have a great tradition to build present day tailgating on. Probably the wildest tailgaters in the ACC that will make you think back to your younger years.

2. Clemson: Clemson pride swarms all over this tiny South Carolina town on Saturday’s. Paw prints and colors of orange and purple seem to cover everything. Fans have a reputation as being some of the friendliest in the ACC and many would argue it’s one of the best places to tailgate in the country when you combine the food, drinks and atmosphere.

3. Virginia Tech: Is very well known for being a bunch of tough and rowdy fans…who also know how to have a good time. The mountain backdrop is a unique piece of scenery that hardly any BCS schools can claim. Jumping fans will listen to “Enter Sandman” outside the parking lots while drinking from “Gin Buckets”, a bucket filled with Gin and Mountain Dew.

4. North Carolina State: The Wolfpack faithful create a real country feel on game days. Fans seem passionate about their team and get creative with different tricked out vehicles. A diverse level of hard partying students and laid back country barbeques will surround the stadium all afternoon. 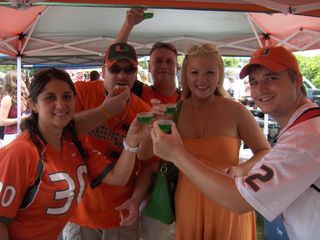 5. Miami: Unfortunately they are one of several schools in the ACC with strict tailgating rules. Miami fans pride themselves on their teams’ “swagger” and they carry that into their tailgates. Rules or no rules Miami fans party hard and also specialize in unique Cuban cuisine.

6. Georgia Tech: In the heart of Atlanta but it’s cool to see skyscrapers in the backdrop of a football game. The Greek houses surround the stadium for a lively atmosphere and “The Varsity” is a must for anyone who seeks an old style fast food joint.

7. North Carolina: Tar Heel town is a famous spot for visitors with Franklin Street being the main attraction. There isn’t a vast amount of tailgating around the stadium (most of the fraternities have that land) and most people actually choose to bar hop on Franklin Street hours up to game time. If you want to walk a little bit you can find areas to park your vehicle.

8. Boston College: Space is at a premium (as would be expected in a city) and it can be tough to tailgate because the locals have complained enough for there to be restrictions on the length of tailgates. One could always venture into the Irish or Italian section of Boston and get some unique Boston style food. 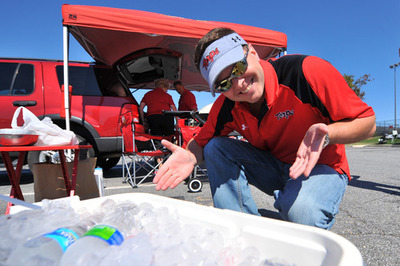 9. Maryland: The home of Under Armor, crab cakes and Terrapin football. Maryland state pride seems to cover the area around a beautiful campus backdrop. The school has a family friendly atmosphere and most fans seem to have a good grasp of solid tailgating. Nothing about the atmosphere really wows you though.

10. Virginia: Tailgating is rumored to be a little strict, and with a smaller student body than most, the atmosphere isn’t quite a knockout. Something unique about Virginia is the corporate tailgates that have popped up more frequently. The campus is very pretty and extremely historical. The crowd is a little older and laid back, not that there is anything wrong with that.

11. Wake Forest: One of the smallest schools in the ACC. However they’re known to have good tailgating areas with lots of short walks, paved parking and friendly fans.

12. Duke: Strange tailgating. I’ve heard of students studying on the lawns surrounding the stadium on game days and seen pictures of students dressed up to go to the game in Halloween costumes in September.