Wherever you go in the Big12 conference, the school truly reinforces the culture of that city or state. You know you’re in Texas when you’re at a Longhorn game and you know you’re in Ames when you’re watching the Cyclones of Iowa State. The Big12 does a great job representing the culture of the American Midwest, and definitely brings the beef. Without further ado, here is my list of the top tailgate schools of the Big12. 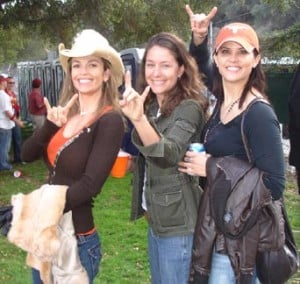 1. Texas: Having a popular college town such as Austin makes it a bit unfair for the rest of the conference – but too bad. Austin, which has been on Playboy’s list of top party school’s, is a big time football program with a big time tailgating atmosphere. Texas tailgater’s have shown many ways of how proud they are of being a Texan. Whether it’s sticking some horns on the front of their vehicle, or bringing gigantic smokers to cook up a Texas treat, these guys do it right.

2. Oklahoma: One common theme you’ll find in the Big 12 is the smoker. Oklahoma is no different as they have big time smokers along with intricate keg systems and enough RV’s covered with school spirit to make your head explode. The women are easy on the eyes and the tailgates look organized and well run. The Sooner Schooner is a tradition that has a special place in college football and is impressive to see for the first time. Norman has major tailgate setups everywhere that can make one feel as if they are at a carnival instead of a football stadium.

3. Texas A&M: These Texas folks love their brisket and they can definitely throw a party. Converted buses, fire trucks, even pieces of junk converted into giant smokers – you name it they have it all. The women are good looking and the BBQ style of Texas shines in A&M country. 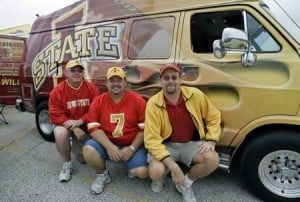 ave great parking around the stadium, plenty of room for RVs and they even rent out canopy tents to fans. The close proximity of the parking to the stadium as well as the organization makes this a great destination to tailgate at in the Big 12. On a side note, I was very impressed with the diverse display of vehicle creations that they had.

5. Kansas State: Fans pack in around the stadium very tightly which I personally like. There seems to be so many RVs in some spots that it looks like a RV dealership. K-State has very friendly fans that just create a suffocating amount of purple on game day.

6. Texas Tech: A bit of a country feel with a BBQ twist to it. A lot of people using tricked out cooking vehicles and smokers. The fans generally seem to be a big supporter of barbequing and smoking their food. A little more mellow scene than other schools but their strength is a passion for cooking.

7. Missouri: Has accessible parking garages next to the stadium but besides that it’s pretty tough to park. One unique thing is that everyone just literally parks on the side of the boulevard and tailgates. The Tigers have their fair share of party buses and tricked out trailers, they also used to have an area for student tailgates called “the Jungle”.

9. Oklahoma State: Fans really embrace their school name as a lot of people take on the look of cowboys and cowgirls! The Cowboys have their share of converted buses and have RV parking available a day before the game which always welcomes a better atmosphere. OSU has really done a nice job of growing their tailgating as it apparently was a non-event a decade ago (winning cures all!).

9. Kansas: Very tame looking. There is a stretch of street where a lot of student’s party, but that didn’t overwhelm me with excitement. You’ll find your typical tents, cornhole, and burgers on the grill but nothing creative. One thing they do have is a very scenic backdrop while walking to the stadium in the fall.

10. Baylor: The administration has been trying to grow it, but the tailgating at Baylor was virtually non-existent a decade ago. The fanatics tailgate, but Baylor needs to round up the troops and continue to grow their pre-game setup.