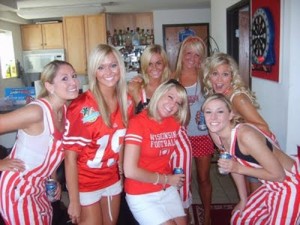 In an ongoing series that I have been releasing throughout the year, I am unveiling my rankings of the Big10 tailgates for this fall (Big East and ACC completed). As a disclaimer I have only seen one stadium personally and did the best job I could to gather data online to get a decent synopsis of each school. Hopefully this list can inspire fan bases to keep their high ranking or pick up the slack. One common denominator throughout my search was that the Big10 schools are big on tradition and that carries over into their tailgates.

Wisconsin: You get the feeling that when you’re tailgating for a Badger game your head is constantly spinning. The tailgates appear pretty wild, especially the student ones. A surplus of student housing surrounding the stadium makes for a rock concert type atmosphere. Brats, beer and buses seem to spill down streets filled with red. Wisconsin is ranked one of the top party schools in the country and that carries over into tailgates during the fall.

Ohio State: One of the biggest schools with a plethora of RVs and tailgating buses. Tailgating can be strict with police enforcement heavy at times. Fans are known to be pretty tough on the opposition but very passionate, dedicated and prideful of their Buckeyes. Having Buckeye Grove (a Buckeye tree planted for each OSU All-American) is a unique piece of Ohio State culture that adds to the pageantry on Saturdays. 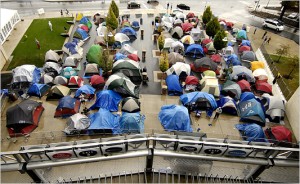 Penn State: Paternoville is one of the most unique things about college football tailgating. If you don’t know about it, Google it and learn. Fans are known to be both friendly and mean, but that’s what you get when you have over 100,000 people around. RV’s camp out days before the game and there are a lot of traditional style tailgates going on. Unfortunately it’s another school where security is starting to crackdown on the students.

Michigan State: The Spartans are well known for solid tailgating, friendly fans (unless you’re a visiting Michigan fan) and an impressive downtown bar scene. The Spartans come close to tailgating utopia with the right combination of everything.

Iowa: Hawkeye fans are known for waking up before the rooster crows to start tailgating. Such dedication!  Yet another Big 10 school that had to crack down on the flow of alcohol at tailgates.  If you’ve made Playboys top 10 party school list within the past few years then odds are your tailgates are pretty wild. The one downside was the lack of unique tailgating that I am accustomed to seeing.

Michigan: Some tailgate on a golf course which is unique and strange at the same time. The marching band’s parade is apparently a nice tradition that Michigan almost uses as a calling towards the stadium.  Lots of RVs and converted vehicles add to the pageantry. You get a real traditional feel from their tailgating and it’s just a reflection of the program’s history.

Nebraska: Small patches of tailgating everywhere with people that really know their football. Alcohol is again policed very hard. Lots of people in crazy outfits and lots of corn based products in tailgate spreads (who would’ve thought?) The women of Nebraska might take the No. 1 spot and they’re not all the farmer’s daughter. The Cornhuskers pride themselves on their friendliness and knowledge of everything Nebraska.

Illinois:  Lots of friendly Illini fans fill the acres of tailgating lots surround the stadium. Illinois has their fair share of unique tailgate vehicles and has great campus bars and a fun but easy going environment. Nothing is spectacular but they have a consistent and respectable tailgating scene. 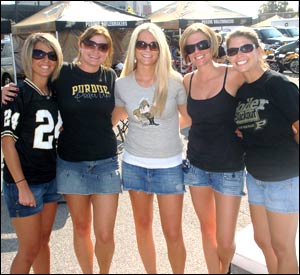 Purdue: Tailgating can be fun and enjoyable but the parking is very limited. Fans are known to jump on and off the bandwagon which can make for a tricky tailgate if you are the visitor. The big drum is a cool tradition inside of the stadium, but if they don’t already do it, I think it’d be neat to have that thing marched around the stadium prior to kickoff.

Northwestern: The most appealing thing about the campus tailgating is that it’s not far from Chicago. However I’m not sure how many people want to tailgate in the Windy City and then ride in a train over to the game. While there aren’t a ton of people that tailgate compared to other schools, the flip-side is that the people that do tailgate are very dedicated and very knowledgeable about Northwestern. It’s a great tailgating scene to bring a family to as well.

Minnesota:  The best bet for visitors is Dinkytown or Stadium Village. A lot of unfamiliarity with a new stadium made it hard to research tailgating. There is a strong presence of an older crowd at the games which is great for a young family but maybe not great for a college kid who wants something a little more rowdy. Winter comes early in Minnesota but that won’t stop the dedicated fans who just cook up some Gopher specialties to stay warm.

Indiana: Hoosier tailgating seems to be one of two extremes; either laid back or intense. Some of the tailgating got so crazy that the University had to hire a private security company to control the students. Lots of music, bodies and drinks make it look more like a concert than a tailgating venue. If you want something a little different the campus bars are said to be average so you should probably stick to crowd surfing.

I hope this list gives one a barometer of what to expect at various Midwestern tailgates in the fall. Good luck!