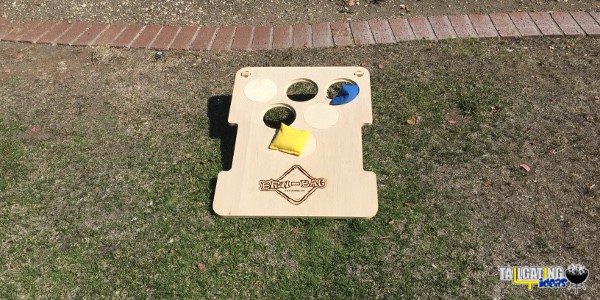 When you combine two good things you create something great. Like chocolate and peanut. Ribs and BBQ sauce. Or beer and just about anything. Do you remember back in the early 1990’s when Miller Lite had commericals that combined two things to make it very fun and interesting? Like this commercial:

Now what if two of the most popular tailgating games in the parking lots, cornhole and beer pong, had a baby? That’s what you get with Bru-Bag.

Bru-Bag is so simple it makes me wonder why nobody came up with this idea sooner. It takes the game play of cornhole and combines it with the rules of beer pong. Even down to the smaller rules like “bring backs”, reracks and even encourages distracting your opponent just like in beer pong, Bru-Bag combines the best of both games. Take a look at the video instruction on how to play Bru-Bag.

Now that you have seen how the game is played, you want to know is it fun and how will is hold up while tailgating? Fortunately we were sent a sample of the classic version of Bru-Bag and recently tested it out while tailgating. (Disclaimer: We received a sample of Bru-Bag free of charge. The fact this sample was provided to us for free in no way influenced our opinion of the product nor did it impact our ability to test and review the product fairly and objectively.)

We took Bru-Bag to the Chargers vs. Cardinals pre-season game and set up the game boards. They fit easily in our vehicle because the legs are removable and installed quickly once you are ready to play. For this game we had to be especially space conscience because we had four people traveling to the game in one car and could not fold down the seats on our Honda Pilot to accommodate bulky tailgating gear.

Once at the tailgate we set it up and played a couple of games. Passers by immediately recognized the hole pattern to be similar to the pattern of a six-cup beer pong game. It was definitely a conversation starter and everyone that encountered it thought it was a great idea to combine cornhole with beer pong.

We found Bru-Bag to be fun, innovative and improved the game of cornhole dramatically. Sure you will have your cornhole purists out there that may turn their nose up at this game, but normally even the hardest core cornhole snobs will relax that attitude once they hit the tailgate lot. And to be honest, if your hard core cornhole purist can’t let it go for an afternoon of tailgating, do you really want him/her at your tailgate party anyway?

After testing out Bru-Bag at home in the backyard and while tailgating, it is definitely “Tailgate Approved”. High quality craftsmanship and a fair price makes this a great new tailgating game that will help set your tailgate apart from everyone else. Now you can stop the arguing between the cornhole and the beer pong crowd on which game to take tailgating.

You can get your own set of Bru-Bag from our online tailgating gear store, Shop.TailgatingIdeas.com.