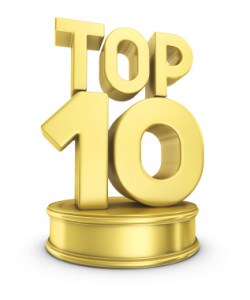 With new year’s eve rapidly approaching it seems as if everyone is looking back and reflecting on the past year. If you can’t beat ’em then join ’em is how the old saying goes.

2010 was a rather good year for TailgatingIdeas.com. We opened the year by attending and appearing as a guest panelist at the Sports Licensing and Tailgate Show in January. We also added two new contributors to the TailgatingIdeas.com family, welcoming in Foster “Jim” Flint and Mary B. Clark into the fold. Throughout the year we gained new visitors from such big name websites like Sports Illustrated, hit the front page of Digg.com in July, also we were featured in other high profile blogs and message boards. Also in July we opened up Shop.TailgatingIdeas.com, our tailgating gear store that organized and made finding those tailgating items that you normally can’t find in big box stores easier to find and easier to buy. In August we celebrated our three year anniversary of blogging on tailgating and the tailgate party lifestyle virtually thumbing our noses at the critics and detractors that said a blog dedicated to tailgating would not work.

All in all, 2010 was a great year for the expansion and reach of this tailgating website but it would not have been possible without all of you reading this right now. With that said, we would like to say thank you for reading and visiting. If you are a regular, thank you for your loyalty and we hope we have provided you with some outstanding tailgating ideas over the past year. If you are brand new, welcome and we hope you bookmark us and return frequently. So without further delay, let’s take a look back at which posts were the most viewed and read by you the visitors.

10) My Pole-ish Horseshoes – Back in March we discovered this new tailgating game that has more popularity on the eastern seaboard compared to the west coast. By taking the game of polish horseshoes and improving on it to give it a wider base that does not tip over easily and also breaks down and transports easily to a tailgate party it is no wonder this post was one of our most popular in 2010.

9) The REAL Top 10 College Football Tailgates of 2010 – Some sports blogger decided to put together a list prior to the start of the 2010 college football season stating which games would expect to have the best tailgating prior to kick off. It was a nice list but basically read as if it were a college game preview of which games looked on paper to be great match-ups. Real tailgaters understand that a perceived good game on the field does not always translate into a great tailgate. So we decided to make our own list taking into account start times, rivalry aspects, tradition and just overall tailgating enthusiasm at that particular institution and compiled our own list. This post became quite popular as other sports blogs and messages boards referred to it and thus sent quite a large number of visitors our way.

8) Winegard Carryout: Portable Satellite Antenna Review – Normally a product review does not gain popularity to the point it breaks the Top 10 of most read post in a particular year but Foster Flint’s review of this product was the exception to the rule. Apparently there are a ton of people out there thirsty for knowledge on a quality and reputable portable satellite system for tailgating. Judging by the number of visitors coming in to read this review, apparently they got what they wanted.

7) New York Yankees Tailgating Grill – It’s no secret that since customizing our first Margaritaville Tailgating Grill to San Diego Chargers colors and theme we have done other teams since. With all due respect to the other team grills we have customized over the years, the New York Yankees grill we completed in April was probably the most impressive of them all. What made this grill stand out was the attention to detail we put into this grill all the way down to the authentic pinstripes. The pinstripes on this grill were the exact color and width of a Yankee pinstripe you find on their uniforms. On top of that the spacing between the pinstripes was the exact width you would find on Derek Jeter’s uniform. As you can imagine we proudly posted up photos of this grill and numerous Yankees fan message boards and forums immediately linked to it making it our No. 7 most read post in 2010.

6) $5 To Walk & Tailgate? – In one of the more outrageous tailgating stories of 2010 comes this one surrounding pedestrian tailgaters in Cleveland. Apparently the operator of one of the popular tailgating lots near the Browns’ stadium thought it would be a good idea to charge people $5 just to walk into the parking lot and join friends who were already parked. As you can imagine this caused an uproar and this story was getting national coverage. We’re proud to say we were one of the first ones outside of the local Cleveland area to report on this and subsequently this post was picked up by larger media outlets like Sports Illustrated and Fox Sports.

5) Help Make Cornholing An Olympic Sport – It was just a simple YouTube video made by the guy over at Brotherhood of Bags encouraging the International Olympic Committee to add the game of Cornhole to the list of officially recognized sports. Well, apparently many of you within the tailgating community agreed making this our fifth most popular post in 2010.

4) Cleveland Muni Lot Outrage & Petition – All in all, 2010 was not the best year for the people and fans of Cleveland. LeBron James announced on national TV he was abandoning the city to take his talents to Miami, the Indians finished out of the baseball playoffs again and the Browns still have a long way to go before they are a viable team for the NFL postseason. What Cleveland fans do have going for them is the tailgating…. up until this year.

2010 marked the year that the famous Muni Lot not only raised the parking fees but reduced tailgating times by over 30%. Instead of opening the gates at 4 am it was announced that Muni Lot gates would not open until 7 am. As you can imagine, this outraged Browns tailgaters and they responded in kind. They immediately started a petition and organized their own civil disobedience that would make Ghandi and Martin Luther King Jr proud. Reports of tailgaters lining up at the gates at 4 am and waiting for three hours for them to open caused massive traffic congestion and potential accidents that the police ended up opening up the gates at 6 am in order to protect public safety.

3) Stocking Stuffer Ideas – Always around the holidays we hear people complain that they never can find good stocking stuffer ideas that are small and inexpensive enough to give to the tailgater on their list. So we decided to put together a gift suggestion list that fit the bill that also would appeal to tailgaters. Judging by the number of Bottle Cap Caddies and Shotgun Party Openers sold, this post most definitely ranks No. 3 in popularity in 2010.

1) Holiday Gift Guide 2010 – Just like our Stocking Stuffer post that became quite popular, many of you were looking for that perfect gift for the tailgater on your shopping list. We compiled this list of items that included the Clear View LPG Tank, Drill Blender and the Pole Caddy among other cool tailgating gear. This post was the most popular one of all of 2010 despite being posted in the month of December when others had an entire year to reel in as many eyeballs.

So there are the top 10 most popular posts that were published on TailgatingIdeas.com in 2010 based on total number of visitors and page views. Did you have a favorite that didn’t crack the top 10 but is worth mentioning? Leave a comment below and let us know which one was your favorite.

Happy New Year and here’s wishing all of you tailgaters out there a happy, safe and prosperous 2011!