Last year we published the Holiday Gift Guide 2010 for tailgaters and it was a smashing success. The feedback we got on that post was so overwhelmingly positive that we ended up doing a Stocking Stuffer Ideas the following week. It’s that time of the year yet again and many of you have been asking about if we will do another holiday gift giving guide for that tailgater in your life. The answer is yes and before you ask the next question, the 2011 edition of stocking stuffer ideas for tailgaters is coming next week.

Last year’s gift giving guide included many fun and cool items that can easily be put under the tree this year. But this year’s guide will include new items great for tailgating that have been introduced in 2011 or are just too cool to leave off. So without further delay, let’s get to the Tailgating Ideas Holiday Gift Giving Guide 2011: 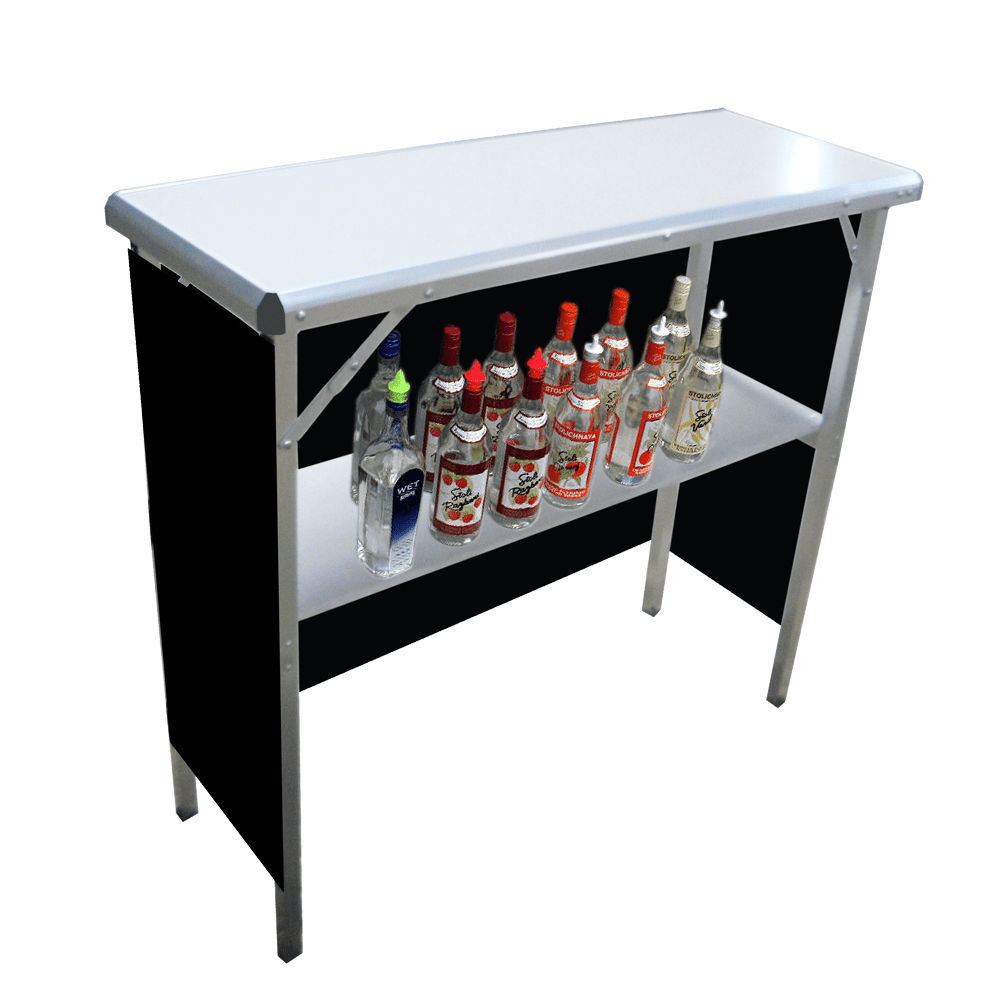 GoBar – Setting up in less than 60 seconds, this portable bar is made of high strength aluminum that will make any tailgater the life of the parking lot. It comes with three different types of wraps depending on the atmosphere you find yourself in. The three skirts come in a football gridiron, an island style tiki format or plain black when you want to make it classy. Comes with a removable storage shelf that can hold up to 25 pounds while the bar top holds 25 pounds as well. Over 50 pounds of liquor bottles? That’s more than Lindsay Lohan and Paris Hilton on a weekend bender. The GoBar sells for $89.99 plus $20 flat rate shipping and can be found HERE.

Blacktop 360 Party Hub Grill/Fryer – Normally when it comes to variety in tailgating grills the major choices are either charcoal or propane. The Blacktop 360 hit the market right before football season this year and did so with a bang. The major difference between this cooking machine and all the others is the versatility it brings to the parking lot. As you saw from the video, it has a grill, griddle, warming plate and a deep fryer. Normally with a regular tailgating grill you would need to buy those types of cooking devices separately. The Blacktop 360 combines them all in one and eliminates that problem. Even if you don’t plan on using the fryer to cook up french fries or onion rings, you can use it to warm up nacho dips or soups. The Blacktop 360 is available in stores like Sport Chalet and Dick’s Sporting Goods or online at places like Amazon. The Blacktop 360 typically sells for less than $250 depending on the retailer you choose.

Hitch-N-View – The tailgater on your gift list wants to bring their TV to the game but has no place to put it. Either they no longer have the stand for it or just don’t have the room for one more thing on their buffet table. The Hitch-N-View takes your tailgating TV off of the table and places on the rear of your vehicle via the tow hitch. It even has a fold down tray that can hold your cable box, DVR, video game console or DVD player. It can handle flat screen TVs up to 40″ and is modestly priced at $79.95.

Z-Bench – Most people while tailgating with their pick-up truck sit on the back of the tailgate. After all, that’s probably where the term “tailgating” came from. But this is 2011 and tailgating has evolved. The Z-Bench is not just a high grade aluminum bench that is made from the same materials they use in stadiums and on the sidelines of NFL games. It is also the largest and safest step you can use to get in and out of your truck bed. In addition to that, by using a Z-bench, you no longer have to lug a folding table to the tailgate party. Simply sit facing the bed of your truck and now your tailgate can be used as a table to eat on. Also, while on your way to the game, the Z-Bench can be used as a cargo holder to keep all your tailgating gear tight and snug up against your tailgate. The Z-Bench fits most full sized pick-up trucks, foreign or domestic, and runs $349.00. You can learn more or get your tailgater on your list a Z-Bench by visiting z-bench.com.

Sholf – Most tailgating games you see in the tailgating parking lots are tossing games like cornhole, washers and beer pong. Sholf is a unique game in that it combines two popular games; shuffleboard and golf. Take a look at the video and you will see that Sholf is probably a game your tailgater has not played or seen in the parking lot and will help set his or her tailgate apart from all the others. Affordability is not an issue with Sholf in that it is priced under $50.

Soulra XL Solar iPod Speakers – This is a portable iPod/iPhone docking station and speakers that has a fold-up solar panel. The 72 square inch enhanced monocrystal solar panel powers the rechargeable lithium ion battery pack and can even charge your iPod or iPhone while it plays. It also comes with an A/C wall outlet adapter so you can charge it with good old electricity from your home wall outlet if you prefer. The cool thing is that if you have a tailgater that enjoys music yet is environmentally conscience, this is the perfect gift. Plays for hours without expanding the carbon footprint and does not even need major direct sunlight. It can charge and play under overcast skies or even indoors near a window. The Soulra XL Solar iPod Speakers will run you about $250 and can be purchased at the Eton Webstore.

Tailgate Partymate – We all could use some extra room to spread out while tailgating. Typically you have to bring multiple folding tables to get the adequate table space you need to serve food or to have a place to eat. Now comes a brilliant tailgating invention that provides two tailgating tables that attach to your tow hitch and ride safely outside your vehicle. No more hauling tables in and out of your car or truck. Simply lock it into place and drive it home. The Tailgate Party Mate runs $124.95. Click HERE to get the tailgater on your shopping list one of their own.

BecoBall – Although it may look a lot like cornhole this tailgating game will take you back to the days of playing skeeball as a kid. BecoBall does use “Hackey Sack” type balls to throw at the targets but it is the scoring area is what sets this game apart. It has fabric pockets that catch the bags in different scoring zones much like the game of skeeball had different scoring areas. Available in a multitude of color combinations, we are almost assured one of the color combinations will match your tailgater’s favorite team’s colors. Priced under $80 or $90 based on the type and color scheme you prefer, BecoBall can be purchased HERE.

Tanksetter – Be prepared that if you get the Tanksetter for your tailgater on your list, when they open up this gift they may ask you “what does it do”? First impressions can be deceiving in that after they use it once, they will ask you why you didn’t buy another one. In a nut shell, the Tanksetter widens the base of your propane cylinder to prevent it from getting knocked over during transport or while tailgating. The base on those steel propane tanks are so small they easily tip over which can be very dangerous. If you know a tailgater that uses full sized propane cylinders while tailgating, this is a great gift that will help keep them safe and will save them a lot of headaches down the road. At under $20, it is a great gift for the tailgater in your life. You can get a Tanksetter HERE. 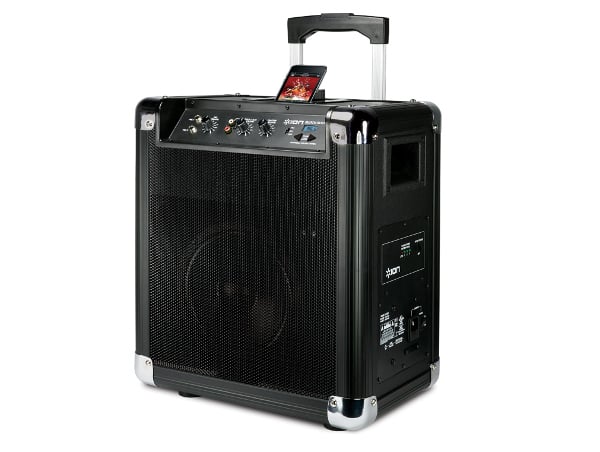 ION Blockrocker – At first glance this looks like a small guitar amplifier but this is way more than that. This is the ION Blockrocker that is a portable sound system that has a docking station for your iPod/iPhone and has AM/FM radio capabilities. It even comes with a microphone so you can either sing along with the songs in a nightmarish parking lot karaoke or you can let the other team’s fans hear how bad their team sucks. The ION Blockrocker weighs less than 20 pounds, has a convenient carrying handle and the built-in and rechargeable battery can give you up to eight hours of play time on a single charge. The Blockrocker will set you back less than $200 and you can find out more by visiting HERE.