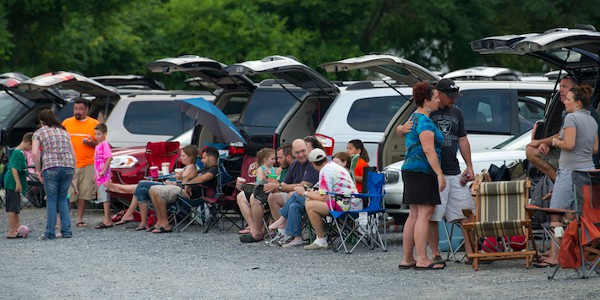 Deeply entrenched in the Presidential election season, there has been much debate on how to improve America. Questions on if America can be considered great or if it ever was great in our history about in this politically charged season. No matter where you fall on the political spectrum, one thing that is irrefutable is that tailgating, is making America great again.

Most people think back to a simpler time when we felt safe in our neighborhoods, we felt comfortable being around our family and friends and we lived carefree (not carelessly). No matter if that time was post WWII 1950’s, the Summer of Love in the 60’s, the “Living in Oblivion” 1980’s or another time in your life that holds a special place for you, we all want those times to return. And it dawned on me that through tailgating, those times we all cherish are embodied in tailgating.

This past Sunday prior to the San Diego Chargers vs. New Orleans Saints game, I took my eight year old son with me. We tailgated of course but despite not meeting up with the regular folks we normally tailgate with, we experienced a piece of Americana that has been missing for too long. A number of individual experiences all occurred within a three hours time span that reminded me of better times from the past.

The following is a primer on how things used to be back in the day, the time when people thought America was great, a comparison to nowadays and also how tailgating returns us to a simpler time.

Old America: Kids playing in the neighborhood until the street lights came on.
Nowadays: Kids locked up inside the house for fear of some random white van pulling up kidnapping the children off the front lawn.
Tailgating: This past weekend, there were kids all over the parking lot. They were out and getting some sunshine and tossing the football with each other. Parents were keeping an eye on the kids but they didn’t hover over them like helicopters and actually didn’t freak out if their kids talked to a stranger in the next parking space.

Old America: Kids going next door and asking “Can Jimmy come out and play”.
Nowadays: Organized play dates that resemble the spontaneity of cosmetic surgery.
Tailgating: Parked across from us was a family with four kids. One of the dads suggested the kids come over to our tailgating space and ask my son if he wanted to join them in tossing the football. My son accepted their invitation and gladly tossed the football around. The other dad came over and organized a game of street football right there between the parking stalls. I even heard the familiar call, “CAR!”, signaling the game needed to be suspended for 10 seconds while a car made it’s way to find a parking space. The kids all retreated to a safe spot along the sides of the roadway and then quickly resumed the game as if nothing had happened.

Old America: When baking a cake and short on an ingredient, going next door to a neighbor’s house to borrow a cup of sugar.
Nowadays: Getting in your car and driving to the store to buy that bag of sugar.
Tailgating: While tailgating, once you are parked, you are parked for the long haul. There is no pulling up stakes and running to the convenience store for more ice. I witnessed numerous times tailgating neighbors go to each other asking to borrow some mustard they apparently left at home or even some lighter fluid for their charcoal grill. Every single time, the tailgating neighbors gladly offered up the use of the missing items and even told them they could keep it as long as they liked. These were complete strangers until they parked next to each other and quickly became fast friends.

Old America: Friends with neighbors and invite them over for meals.
Nowadays: Only acknowledge your neighbors if you happen to check your mailboxes at the same time.
Tailgating: While tailgating and as more tailgaters trickled into the parking lot, the empty parking stalls started to fill up. Each time a new tailgater parked, they would exit their vehicle and introduce themselves to the folks that were parked next to them. Hearty handshakes between complete strangers occurred just because they chose to park in an empty space next to them.

Old America: Helping a neighbor fix their car in the garage.
Nowadays: “Sorry man, don’t you have Triple A?”
Tailgating: After the game was over and we made our way back to our car, we noticed a car parked near us with the hood up. (An apparent dead battery probably from playing their car radio for three hours prior to the game.) Instead of rushing to sit in traffic, the car with it’s nose facing the distressed vehicle popped it’s hood for a jump start. Neither vehicle had jumper cables and they both asked others around them if they could borrow jumper cables. Thankfully they didn’t have to ask for very long because another tailgater offered up the use of the jumper cables and even helped out to ensure the stranded vehicle got the proper jump. After the car was successfully started, they all shook hands and got in their cars and proceeded to the exits.

All of these instances were observed in the relatively short period of time while tailgating prior to the game and immediately afterwards. Whether your political leanings are left, right or middle of the road, you can’t deny that tailgating is one experience that shows how American culture can be good and decent to your fellow man, even if that tailgater is wearing the opposing team’s jersey.