When it comes to tailgating the Sport of Kings, the Preakness Stakes is the crown jewel of all horse races. The Kentucky Derby has history and prestige and the Mint Juleps. On the other hand when you want unadulterated debauchery and rowdy tailgating, Pimlico Race Course Infield is the only place to go. That is if you can handle it.

If the sight of overserved college kids running on top of port-o-potties while dodging half-full beer cans disgusts you, please stay home. If you don’t want to see girls straight out of high school and raised on fast food flashing their breasts like it is an open audition for Girls Gone Wild, don’t waste your time. It gets so wild that one Baltimore Sun reporter wrote, “Am I hallucinating, or did I really just see an undergrad take off her thong and use it to slingshot Jell-O shooters into some guy’s mouth?“. No you did not imagine that and I wonder if the guy was able to choose his flavor preference. (The Jell-O shot flavor you filthy minded pervs!)

Each year the infield at the Preakness gets a little bit more rowdy than the previous year. In 2006 it was pole climbing. Not just pole climbing but pole climbing while facing a hail of beer cans hurled at the climber’s head. Here’s video proof. 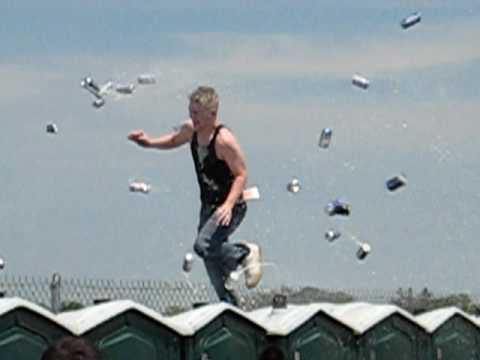 I wonder what it will be this year? I’m not making any suggestions because I would have never thought kids would want to race each other using the tops of portable toilets as a racing surface. Seeing how The Preakness tailgating has jumped the shark and it is merely a matter of time before they clamp down on the rowdy behavior, you may want to go before it gets watered down. That way you can tell your kids you were there before it was lame and you couldn’t do anything. Kind of like claiming you were at the original Woodstock in 1969.

You know it will happen too. Some kid’s parents will end up suing Pimlico Race Course because their kid got hurt doing something insanely stupid. The attorneys will claim it was Pimlico’s responsibility to protect him from himself and a huge lawsuit will ensue. Once that happens, the infield at The Preakness will get neutered to the point there will be more cops in there than a police convention. So make sure to go either this year or next because you know the end is near. Just don’t complain to me when at the end of the day your shirt smells like it spent an hour in the gutter on Bourbon Street. You have been warned.