Since starting this tailgating blog back in 2007, we have tested, tried and demonstrated a lot of tailgating gear and written a lot of tailgating product reviews. Some good and some bad. But because we are a blog, a great product we discovered two years ago may be lost in the tons of posts we have published after discovering it. Maybe you are a new reader and haven’t had the time to pour through every single post we have done in the past three years. So in order to help out the tailgaters that might not have read about some of these cool tailgating products, we will be doing a weekly feature on products we reviewed a while ago. We call it Featured Gear Friday and this week’s product is: The FlameDisk. 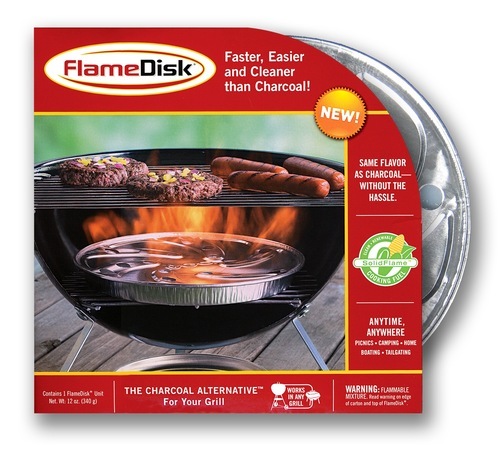 Every tailgater knows that gas grills light faster and are much cleaner than using charcoal. But what if you are not ready to spring for a new gas grill this coming tailgating season? What if the old, trusty Weber has served you well but you are tired of the wait time and the ash and soot associated with your old charcoaler? With gasoline prices going sky high, surely the price of propane is going up too, right? There has got to be a better, cheaper and more environmentally friendly way to grill while tailgating. Now there is with the FlameDisk.

I was recently sent a product sample by the folks at uGo Grill to test out the FlameDisk. Basically it is a cleaner and easier alternative to charcoal grilling. I tested the product at home and thought it might be fun to make a video out of it.

The FlameDisk uses eco-friendly ethanol, made from corn and ethanol is a renewable biofuel. Most charcoals (and all lighter fluids) contain petroleum-based components from fossil fuels which are non-renewable. Propane gas is made entirely from non-renewable fossil fuels. I keep hearing the buzz word carbon footprint a lot these days. The FlameDisk is a lot more environmentally friendly than both charcoal and propane grills and lessens your carbon footprint on the earth.

The other major advantage as you saw in the video is the amount of time it takes the FlameDisk to heat up. I chose to let it burn for five minutes before placing my food on the grill but I could have done it sooner. There is no way I would have been able to start grilling in less than five minutes had I been using charcoal. And since the FlameDisk burned itself out in just about an hour, I was able to discard the empty aluminum casing into my recycle bin with my bare hands. With charcoal, the coals would have still been hot and would probably take about four hours to burn out and cool down completely. With many stadiums and arena parking lots banning charcoal grills because of the headache associated with the disposal of the hot coals, the FlameDisk is a smarter alternative. Also, no more ash and soot to worry about when it comes time to load up your grill into your car.

You are probably asking, “yeah, but how does the food taste?”. I tried a few of the bratwursts (off camera of course) and they tastes just fine as if they had come off a gas grill. No funny odor or aftertaste at all. If I had served them at a tailgate party, no one would have even known they were cooked using an environmentally friendly biofuel.

All in all, the FlameDisk is an awesome product. It got hot in less than five minutes, stayed very hot for about an hour and cooled down rather quickly. I would highly recommend getting a few FlameDisks considering football tailgating season is just around the corner.

The company, Sologear, was founded in Madison, WI and is run by four men who are avid tailgaters themselves. You can buy FlameDisks at select locations in Wisconsin and Illinois. If you aren’t in either one of those states, you can always buy them online. A pack of three (3) FlameDisks will run you $19.99 per 3 pack with free shipping and handling included in that price. Compare that to your next bag of charcoal. Make sure to consider that you are having less of an environmental impact and you are able to grill from the moment you light the FlameDisk.

The FlameDisk gets the Tailgating Ideas stamp of approval and I would recommend this product to any tailgater.