If you are a fan of social media, you have probably seen those Football Stadiums made entirely out of snacks. Impressive but time consuming, expensive and not terribly practical for tailgating or even game watching at home. We recently discovered a new product called Taste of the Stadium. 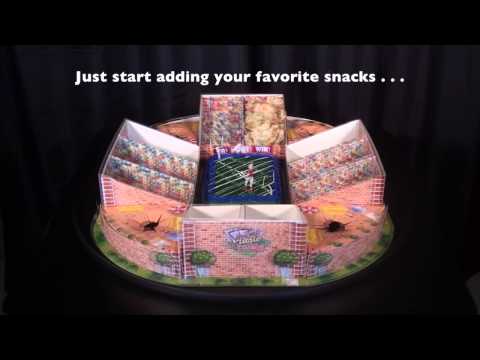 As you can see in the video and the photo above, Taste of the Stadium is a way to hold all of your game day snacks in one place while contained in a replica football stadium. The field itself can even hold a cake or you can place figurines in there to replicate a real game going on and your snacks are the spectators.

We were sent a sample of Taste of the Stadium. We tried it out this past weekend while watching the AFC and NFC Championship games.

The Taste Stadium arrives in a large, flat box that will require some assembly. My 7-year old son and I were able to assemble it completely in about 10 to 15 minutes. We stopped along the way to take photos so it may have taken less time than that had we been focused on just putting it together.

The instructions are very easy to understand. It is a lot of folding Tab A and inserting Slot B but all in all, not confusing at all. If you are more of a visual learner, they even have an assembly video. 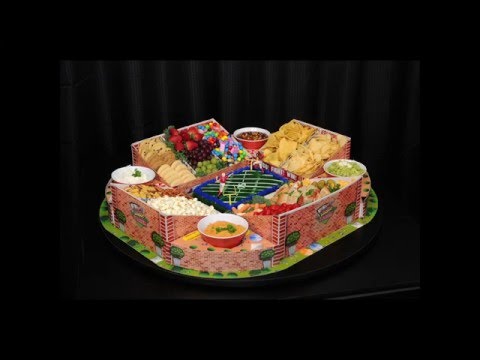 Once assembled, the stadium measures 31″ x 35″. The ‘field’ holds a 13″ X 9″ X 2″ pan or standard 1/4 sheet cake. The corners hold traditional sized deli or dip containers, both round or square. The grandstands hold a regular sized loaf pan. All materials and printing are food-safe allowing chips, cookies or any other food items to be placed directly in the stadium. In most cases, wipe it down with a damp cloth and you can use it again.

As we mentioned, we tested out the Taste of the Stadium while watching the football games this weekend and it passed with flying colors. A perfect addition to any watch party at home, a.k.a. “homegating”, but even more perfect for a Super Bowl watch party.

Because we are all about tailgating, the Taste of the Stadium could easily go tailgating and be the hit of the parking lot. We would recommend setting it up at home first before taking it tailgating. Break it down once it is assembled and put it back into the box and assemble once parked and tailgating. This way you have put it together once and understand all the folds and insertions. This will make the process quicker because we all know time is precious when out tailgating.

Here are the three ways you can enter:

1) Twitter – Tweet us (@TailgatingIdeas) telling us why you would love a Taste of the Stadium. Make sure to use #TGITasteStadium in your Tweet. We will chose one winner at random.

3) Instagram – Comment on our Instagram photo and tag someone that you think would enjoy having a Taste of the Stadium at their Super Bowl or tailgate party.

Winners who enter via our social media channels will be chosen at random. The more people you tag in your comments and tweets could enhance your chance of being chosen.

Winners will be chosen at 10 pm on Wednesday, January 27, 2016. Winners will be notified via the social media channel in which they won on Thursday, January 28, 2016. This way the folks at Taste of the Stadium can send out the free units and they can arrive in time for the Super Bowl.

If you would like a Taste of the Stadium for yourself and would rather not wait to see if you get a free one, you can purchase them via Amazon for $34.99.