You may be the best beer pong player in the parking lot. You may dominate every game and be the king of “bring backs”. So it stands to reason you may need a little more of a challenge while playing beer pong. If your opponent can’t challenge you, why not make the game itself a little more challenging and a little more fun at the same time?

We recently discovered Spin Pong and thought we would test it out and see if it could stand up to the rigors of a tailgate party.

First of all, an explanation: Spin Pong is a motorized beer pong rack that rotates clockwise in a steady and even motion. It takes two AA batteries and will spin the cups for about four to five hours. The rack itself has small depressions so the cups fit snugly into the rack so they do not fall out while the rack is rotating or when a ball hits the cups. Take a look at this video we found on YouTube of someone who has a Spin Pong rack and filmed it doing it’s thing. 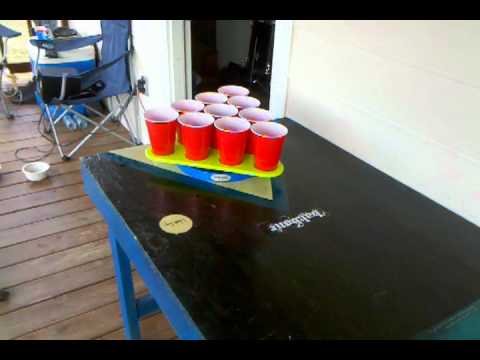 Pretty simple to understand but as you can imagine, makes the game of beer pong just a little more challenging. If you are playing with people who are not great beer pong players, this could extend the game a bit longer so make sure you have a chill cup on the side to keep yourself hydrated.

After testing out the Spin Pong racks, we will deem them “Tailgate Approved”. They are easy to transport with each rack coming in it’s own box. They are durable in that after one set of batteries run out, just replace them with fresh ones and start playing some more. We would suggest not throwing the Spin Pong racks around because they are made of plastic and do have an electric motor inside but they will fit nicely in your vehicle’s cargo space. Priced at around $30 for the pair, we definitely like that aspect that it won’t break the bank.

We thought so highly of the Spin Pong that we have chosen to carry it in our online tailgating gear store. You can buy just one Spin Pong rack for $17 or two, one Spin Pong for each end of the table, for $30. To get one or a pair of Spin Pong racks, click HERE.