It’s no secret here at Tailgating Ideas that we enjoy craft beer. Anyone who has stumbled across our tweets has probably noticed we tend to check into Untappd from time to time.

The craft beer enthusiast community tends to blend and intermingle with the home brewing community. My wife and I have dabbled in home brewing by picking up a 1-gallon brewing kit from a local big box store. It was fun to spend an evening “mashing in”, bringing the wort to temperature, adding hops and ultimately transferring it to the fermenter. I will admit, after a few times of doing this home brew process, we lost interest and would find ourselves back at our local bottle shop shopping for craft beer in bottles and cans. 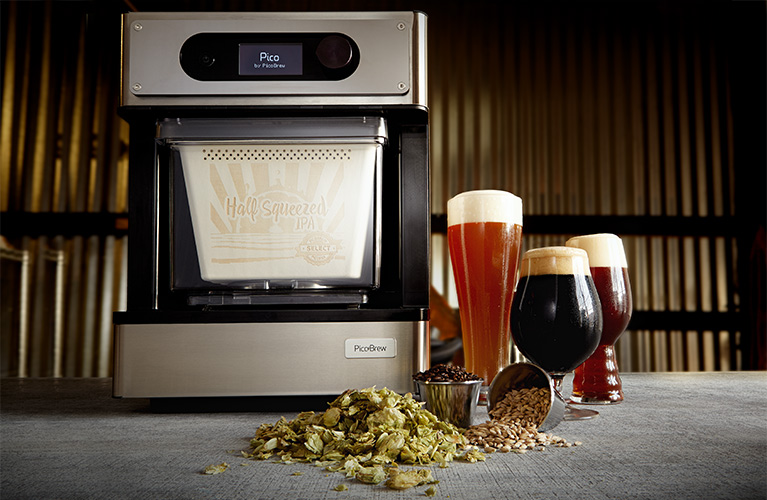 The appeal of DIY beer was the novelty of brewing a beer that was not easily located in our local bottle shop. But the hassle of measuring out the grains, making sure the temperature was exact, ensuring the hops were added at precisely the right time took the fun out of home brewing. We just wanted great craft beer that we couldn’t buy locally. There had to be a better way.

Recently a friend told me about PicoBrew. In a nutshell, PicoBrew is a much like those Keurig coffee makers where you pop in the coffee and minutes later you have a fresh brewed cup of coffee comparable in quality to that overpriced venti cup from a franchise coffee bar. PicoBrew is almost the same thing but with beer. Glorious beer!

Now some home brewers may claim that using the PicoBrew is cheating. You are not really home brewing if you slide in a pre-packaged carton and push a "start" button. That may be true but the question you need to ask yourself is, "Am I home brewing because I enjoy the process or do I just want to enjoy craft beer I wouldn't be able to buy otherwise?". If your answer was the later, PicoBrew is for you.

Long time readers of Tailgating Ideas may recall years ago we reviewed The Bubba Keg Grill. We used it primarily as a double damper smoker but as many users of those types of grills know, maintaining the perfect temperature for smoking can be time intensive and high maintenance. I resisted buying a wood pellet grill for years because my conscience told me I was "cheating".

I finally broke down and bought a Camp Chef Pellet Grill & Smoker LS and started smoking everything in sight. (Seriously, I smoked so much meat the neighbors thought Cheech and Chong had moved in and were renting a room.)

At a party while serving smoked ribs, tri-tip and brisket I confessed to a friend who is an expert grill master that I was cheating and the food was prepared on a pellet smoker. He surprisingly did not chastise me but rather confessed he does the same. He expounded on the virtues of temperature consistency that pellet smokers provide which frees the pit master up to concentrate on more important things like hoisting a few craft beers. He put his hand on my shoulder and said, "As long as the food turns out awesome, who cares what device you used to cook it on?". Sage advice from a veteran pit master who I respected.

Those words resonated with me and I have applied that same advice to my approach to home brewing. As long as the beer turns out great, who cares if you pushed a button and let a machine do it or you spent an entire evening stirring, taking temperatures, chilling and siphoning?

In browsing the Brew Marketplace on PicoBrew, there are hundreds of brew packs from which to choose. Breweries and brew masters from the USA, Canada, Australia, Brazil, Spain, Malaysia, Ireland, Columbia, Peru, Belgium, Czech Republic and the Netherlands all have recipes and brew packs available for purchase. Most packs are priced between $23 and $29 but vary based on the recipe and the brewery. Much cheaper than a plane flight and lodging to taste all of those beers from different countries.

The PicoBrew makes 5 liters of beer (approx. 1.3 gallons) per batch. That is the equivalent of about 10 pint servings. At more than a 12 pack of craft beer for less than $30 and you know it is fresh? Try buying seven 22 oz bombers of craft beer at your local bottle shop for less than $30. I dare you. And if you do, the quality on that craft beer probably isn't really craft at all.

Another advantage of the PicoBrew is most craft beers purchased at retail stored come in bottles. For those tailgaters that party in parking lots with glass bans, home brewed beer avoids the bottling process and is served straight from the fermenting canister.

All in all, if you have the means, we would highly suggest picking up a PicoBrew system for your home before football season starts back up. Think of all the recipes you can try while watching baseball and hockey this spring and summer to know which ones would be perfect for football tailgating.

To learn more about PicoBrew or to buy one of your own, visit PicoBrew.com.