In two short weeks, just 14 days from today, it will be Christmas Day. You know what that means? It means you probably haven’t gotten any of your holiday shopping done. (like us)

Have no fear because Tailgating Ideas is here to save the day. As we have done in the past three years, we offer you a quick reference guide of the latest and greatest gear that any tailgater or sports fan on your shopping list would love. In case you missed the previous years’ gift guides, you can also reference those gift guides for tailgaters from 2010, 2011 and 2012. Without further delay and superfluous introduction, here is the Tailgating Ideas Holiday Gift Guide for Tailgaters – 2013 Edition. Don’t let the name fool you. This little party starter is not just for sharing kamikazes. It used to be called the Party Starter but has since been renamed to the Kamikaze. This versatile mixed drinks and shots dispenser is actually dual-chambered and the liquor and the mixers only come together when the trigger is pressed. Fill up the rear reservoir with the liquor of your choice, the front reservoir with the mixer, pressurize the chambers with the plunger and that is when the fun starts. There is an intensity dial on the Kamikaze that you can determine how strong or weak of a shot you want to give out… or serve to yourself. With measuring lines and drink recipe suggestions on the back, the Kamikaze is truly the one party tool your tailgater on your gift list would love to receive. Priced at $25, the Kamikaze can be found HERE. You have a tailgater or a sports fan on your gift list that says they are a die hard fan and are not afraid to show it? Make them prove it by getting them a set of Game Bibs. These bib overalls come in a variety of colors to match any professional or college football team your fan can imagine. Not for the wallflower on your list because Game Bibs will definitely get your sports fan noticed. They’ll feel like an A-list celebrity while out tailgating because everyone will come up and want to take their picture with him/her. A wide variety of sizes for women, men, infants, toddlers and youths are available. Game Bibs cost about $50 per pair and they even offer cargo pants and shorts, sundresses and fitted skirts. Get your tailgater their own pair of Game Bibs HERE. It may be cold outside right now and the furthest thing you can think about is playing beer pong in the pool but Spring will be here before you can say “bringbacks”. (Hard core beer pong players will know what that means.) The main difference between the Pool Pong Party Barge from other floating beer pong tables is they essentially built the better mousetrap. There are the recessed cup holders on each end as with most inflatable beer pong tables but that is where the comparisons end. The Party Barge has additional cup holders around the sides and the real genius of this design is the sunken central cooler. The capacity on the central ice chest is 18 canned beverages plus ice. Now you never have to get out of the pool to refill the cups when it is time for the next game to begin. Priced at $55, the Pool Pong Party Barge can be found HERE. Books are always a popular holiday gift item but this is one book that the tailgater on your list will love this year. The Pro Football Cookbook is a compilation of 32 main dishes, 32 sides and 32 cocktail recipes all inspired by the 32 NFL franchises and the city from where they hail.

For tailgaters stuck in a rut, this cookbook would be great for some new recipe ideas to make everyone in the parking lot stand up and take notice. The Pro Football Cookbook is a fantastic road map for tailgaters to have a built-in menu to reference for a meal theme based on that weekend’s opponent. Your team is playing the Washington Redskins? Make Hogs Sandwiches, Roasted Redskin Potatoes with Mustard and a Red Gin Rickey (pages 160 – 163) to wash it all down. When it comes time for your Super Bowl party, find the section of the two different teams playing and make those recipes for your guests and people will think you are a world traveling genius. Stadium Journey Pro Football Cookbook is available in hardcover from Amazon.com and would make a great gift for any tailgater this holiday season. The tailgater on your list says regular old beer pong has gotten a little dull lately? Maybe they have gotten so good at beer pong they need an added element of challenge? Or maybe they just want to stand out from the rest of the tailgate parties with a regular beer pong table and want look just a little bit different? No matter what they’re looking to do to spice up their beer pong game, Spin Pong has got you covered. Simply stated, Spin Pong is a battery operated beer pong rack that rotates the cups clockwise while you play. Just insert two AA batteries, load up your cups, fill your cups and let the balls fly. The level of difficulty increases while the fun level is raised as well. Spin Pong is priced at $17 for one rack or $30 for a set of two, one for each end of the beer pong table. Spin Pong can be found HERE. For some reason, hot dogs just taste better at the stadium. They don’t use magic hot dogs and buns made from an age old secret recipe. Stadiums use steam to prepare their hot dogs and it is the reason why you can’t duplicate the same taste at home or in the tailgate parking lot. That is until now. The Steemee Wonder is a stainless steel hot dog steaming system that can prepare six hot dogs and six buns in six minutes. They taste exactly like the hot dogs you have grown up eating inside the stadium but at a fraction of the price. The Steemee Wonder sells for under $35 on Amazon.com. 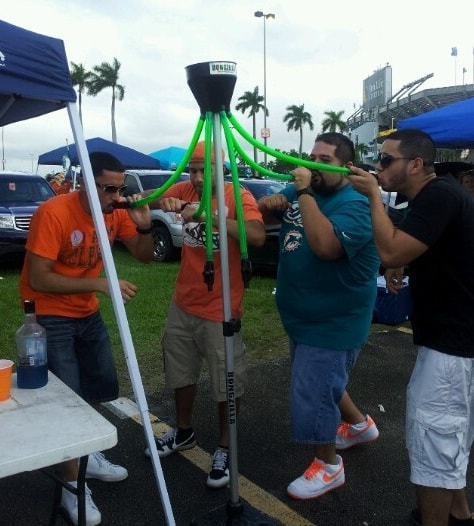 By nature, tailgating is a social activity. What could be more social than doing a beer bong with five additional friends all at the same time? That’s what the Bongzilla is all about. The Bongzilla is a pole mounted beer bong with six hoses coming off the bottom. The pole lowers and extends for ease of filling in the lower position and once filled, raise it up to the full height and bring in your friends. The pole extends and raises the funnel up to six feet in the air to allow gravity to do it’s thing. Did we mention that the Bongzilla funnel can hold 144 oz of liquid? That’s a whole 12-pack of beer for those of you math challenged. At the end of each drinking tube is an open/close valve so everyone can start drinking at the same time. Also, if you don’t have a total of six people wanting to drink, you can plug the tops of the hoses from inside the funnel to block any liquid going into the hoses that will not be used. The Bonzilla is priced at $55 and can be found HERE.

It is no secret that Honda generators are the gold standard by which all generators are compared. Packing a max load of 2200 watts and extremely quiet, the Ryobi RYI2200 is the new kid on the black that may knock Honda off as king of generator mountain. The Ryobi is more than affordable priced under $550 and can be found at your local Home Depot. Before we were introduced to BasketPong, beer pong was only played on a flat table. Now here comes MegaPongo and it turns the beer pong world on it’s ear. With backboards and a ball collection system, this is the new age of beer pong. Or if you are not a beer pong player, you can still play it by making up your own rules and standards for play. Numerous cup configurations are only limited by your imagination and it all packs up and is easily portable to any tailgating location. Priced at $135 for a complete set, you can buy MegaPongo HERE. Tossing games are a main staple in the tailgating parking lots but the same ones you have seen are getting about as fresh as a Billy Idol concert. Hi-Tops is a new tailgating game that combines elements of other popular tailgating games like cornhole and beer pong but puts a new twist on it to make it a fun and unique tailgating game. Hi-Tops is priced at $129.99 and that includes two official Hi-Tops Towers, two official Hi-Tops Playing Balls (foot bags), six stakes and one package of Hi-Tops playing cups. For more information or to buy a Hi-Tops game set for someone on your list, visit: playhitops.com Some say “Bigger is Better”. And in most cases they are right. But when it comes to tailgating, smaller is normally better because of size constraints placed on getting everything you need into your tailgating vehicle. Sometimes not only smaller, but something that is mini, may be the best choice for tailgating. Mini Beer Pong is a smaller wooden game that is roughly 24 inches long. A “regulation” beer pong table is 2′ wide, 8′ long and 27 1/2″ high. Mini Beer Pong is four times smaller than a standard beer pong table making it more portable and can fit into the tightest spaces within your tailgating vehicle. If the tailgater on your list is looking for something different that nobody else has, Mini Beer Pong is the gift for them. Mini Beer Pong is priced at $60 and can be found HERE.

Make sure to come back early next week when we publish another edition of our Stocking Stuffer Ideas for Tailgaters. In the meantime, you can also check out the Stocking Stuffer Guides from years past including last year, 2011 and 2010.